Attractive in its elegance, quick in responsiveness, and with voluminous sound this guitar is the perfect tool for a virtuous individualist. Clearness, tone duration, and balance characterize my Kasha model. Its characteristics are:

By default my Kasha guitar has 21 frets. Nevertheless, 24 frets are easy to realize with this model. The Kasha guitar is also offered with multiple strings. The virtues of my Kasha construction are emphasized in the extended bass range of an instrument with seven, eight or ten strings. A construction as baritone guitar is possible as well.

Concert guitars constructed according to Kasha distinguish from a classical concert guitar not only by means of design, but also in its special way of construction. The concept is inspired by the research on acoustics by the American physician Dr. Michael Kasha. The Alterations derived from this research are implemented consequently in my guitar models. The design of the guitar reflects the underlying acoustic principles.

The fact that the guitar has to emit different frequencies as balanced as possible leads to a strongly asymmetric inner construction with flexible back. The resonating back carries the sound reflection into the bass range and thus, solves a construction problem of traditional ways of construction.

The soundhole is placed towards the musician at the upper bout of the instrument’s rip. This increases the resonating surface of the soundboard remarkably and supports bass transmission at the same time.  The position of the soundhole enables the musician to better hear his own play, especially within an ensemble.

Moreover, the innovative position of the soundhole allows for a new way of string attachment at the soundboard of the instrument. The strings are guided with sleeves through the bridge and are reachable with one move through the soundhole. Provided with one simple knot, the strings are put on a small plate, which is glued to the inner soundboard. Due to this, the traditional tie block can be passed. The weight saving and the increased pressure of the strings on the bridge, which occurs due to the increased angle, support the resonating of the soundboard and thus, the sound generation of the instrument.

By default, the model Kasha is equipped with Teflon bearing machine heads of Gilbert (USA). It impresses through its precision, persistence, and its technical appearance. For special requirements I use the machine heads of Klaus Scheller www.gitarrenmechaniken.de, where the scroll and the worm wheel are ball bearded.

The acoustic basic principle of the asymmetric construction also reflects in the design. The bridge is aligned with the bar-bracing under the soundboard and the fingerboard is longer on the descant side than on the bass side. Therefore, on the bass side, a great part of the surface of the soundboard is stimulated to resonate.

The soundboard is finished with a French hand polish. For the body, I recommend a thin coat of lacquer on a acrylic or nitrocellulose basis. These lacquers protect the wood of the body for many years. The oiled and waxed neck conveys the incomparable feel of the surface of the wood and does not become gluey.  Alternatively, the whole body or the whole instrument can be varnished with French polish.

For me, the playability of the instrument is of special importance. This means I adjust the action according to your individual needs. The cross arced fingerboard facilitates the playability, especially for the playing of barré-chords.

My eight-string Kasha model was awarded with the design prize “Seitensprünge” of the Franconian handcraft association in May 2006. Furthermore, in March 2007 the guitar was awarded the Bavarian national prize for extraordinary technical performance in handcraft on the 59th international exhibition of handcraft in Munich 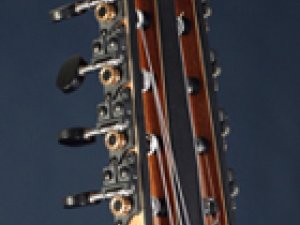 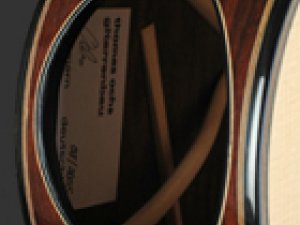 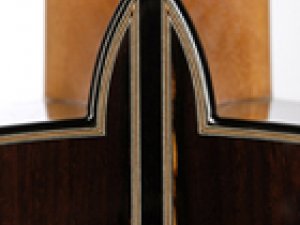 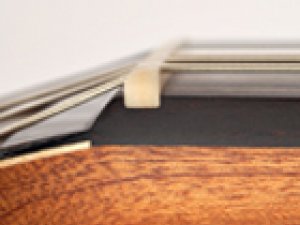